There is a great podcast available that is a collaboration between the BBC and the British Museum. (Found via Jean.)  It presents the History of the World in 100 Objects. Neil McGregor, the director of the museum, has talked about what is human about making objects, anticipating a need for certain tools, and making things beautiful as well as functional.  He was talking about a stone chopping tool in the first one I listened to, the oldest known man-made object.  (Knitting could be said to feature, obliquely, in that Mr. McGregor said that it is a human characteristic to make things more complicated than they strictly need to be.) You can go to the website and look at the objects, as well.

The theme of the whole series is going to be that we define ourselves as human by making things, and coming to depend on the things we make.  I’ve been making some hats with pom poms this week.  What does this tool say about me? 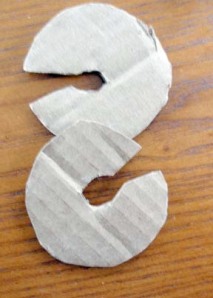 This pom pom maker is my equivalent of the hand axe, I guess.  I  made this one because I recently threw away the twenty-year old cardboard circles I have been hoarding.  Seriously.  I even hesitated before tossing them — two tiny cardboard circles. Of course, only a few weeks later, I decided the baby/toddler hat I was making needed a pom pom.  Off to the recycling and voila –  low tech solution.

What a human who works in a yarn store and therefore gets a discount probably should have as a representative object when it comes to pom poms:

The hats have turned out to be cute representative objects, however.  I have to get over and take some pictures of the hats with some adorable baby and toddler heads in them, but here’s how they look without babies.  (Can you see the wabbit tracks in the snow?)

Some of my students asked for hats that had patterning that wasn’t two-color.  I thought hugs and kisses would be nice for little valentines.

Each hat took about 120 yards/110 of bulky weight yarn.  I used Cascade 128 Superwash.  It’s a nice yarn, and doesn’t have that slippery feel some superwash yarns do. Any one interested in test knitting?

This entry was posted in Uncategorized. Bookmark the permalink.