After the J.Peterguy post about the Harvest Gaiter, there were a number of comments about disgusting things that can be avoided by wearing a cowl in lieu of a scarf. One commenter wanted a lightweight neckwarmer that would help during a urology rotation. I don’t need to explain any further about what could happen to a scarf, do I? So D, this one’s for you.

It took about half a skein of Mini Mochi. I named it for the seaweed, since this stitch pattern is wavy and seaweed like. I also did a solid color version in Rowan 4 ply.

This also used about half a ball. We are talking economic knitting here. You could make two of these babies for less than $10. (Well, a tiny bit more than that if you include the pattern. Thanks as always to Martha – willing to stand on Grand Avenue in the driving snow for the sake of art. Plus I bribed her with cake.  Available on Ravelry, yarns and pattern at the Yarnery (or at your LYS through Yarncraft Supplies.)

My family must have a strange connection with Red Tailed Hawks.  In Minnesota, ours are happily building their nest, but take a look at my sister’s kitchen window in N.J. 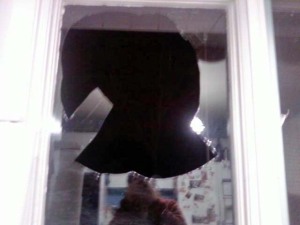 Now look at the culprit. 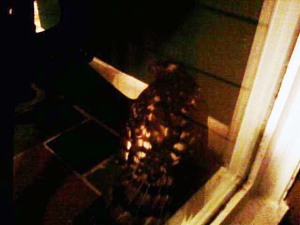 I’m glad to say that no animals were harmed during the  making of this blog post. He was apparently unharmed and flew away, albeit a bit groggily.

This entry was posted in Knitting, Red Tails. Bookmark the permalink.