I just returned from a visit to San Antonio.  My sister had emergency surgery (she is doing  well) while in the midst of getting ready to put the house on the market and move.  I went down to be the bossy big sister and help out.  One reward, other than time with my sister and my 11-year old nephew, was a box of vintage buttons and sewing needles that belonged to my B-in-L’s grandmother.  Here are just a few. Aren’t they wonderful?

The needles are mostly unopened as far as I can tell.  The packaging is a bit faded, I think it was originally purple. 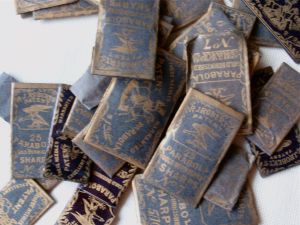 There was an article in Piecework a few years back on the needle making industry in Redditch, England, where these needles were made.  The message inside the needles makes it quite clear, however, that these needles are the real thing, and not ‘ineffable trash.’  I looked up ineffable to make certain it  meant what I thought it did.  “Too great or extreme to be expressed or described in words.”  Such wonderful reading matter, no wonder the manufacturers of the “worthless, rotten, brass-headed needles” copied it.

I must steer anyone with an interest in Textiles over to Yarnlot‘s blog.  She has some recent posts about an Estonian Knitted Toy exhibit she visited as well as a show in the Netherlands called “Unravel.”  Fantastic photos and textiles.

The baby hawks are squeaking louder every day.  It won’t be long before we see them pop their dopey tweetie bird heads out of the nest.

This entry was posted in Uncategorized. Bookmark the permalink.