I am a lazy knitter in general, but with socks I am especially reluctant to do anything that requires me to look at a pattern.  I have made enough socks that I can take some yarn, guess at the gauge, and get going.  Self-striping yarn is a real bonus, because then it looks like I did something difficult, at least to a non-knitter.

However, I am trying to knit most of the projects in Drop Dead Easy Knits, so I pulled some light blue sock yarn out of the stash and cast on for the Idlewild Socks, designed by Kirsten Kapur. (photo by Gale Zucker)

I can’t find the yarn label for the yarn I am using.  I think it is some Periwinkle Sheep I got at Sock Summit in 2009.  So yeah, it is well-aged.  I will use no yarn before its time!

Back to the socks.  I did have to look at the pattern initially, but they are really drop-dead easy. (Branding, ya’ll!) There is only one round out of four that requires attention. I even took it to a St. Paul Saints game last night, and made good progress.

Truth in advertising! These are named for Idlewild Airport, because they are a good design to work on while waiting, and I agree.

I generally prefer to make socks on bamboo double points. I have a routine where I cast on one cuff, then the other, and do my two-at-time on-double points. This hasn’t been working so well for this pari. One thing I learned is that bamboo knitting needles must get more brittle with age. I am using US 0 needles, and have broken 2 so far.  Granted, I am a bit careless with where and how I stash a project bag, so I cannot blame it entirely on the needles. 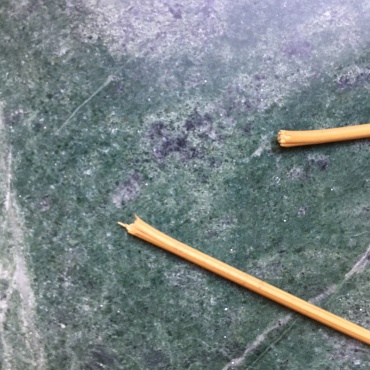 To safeguard my remaining needles, I switched to magic loop. I bought a set of tiny Chia Goo interchangeables a couple of years ago in a weak moment, and I have never used them.  Now is the time. 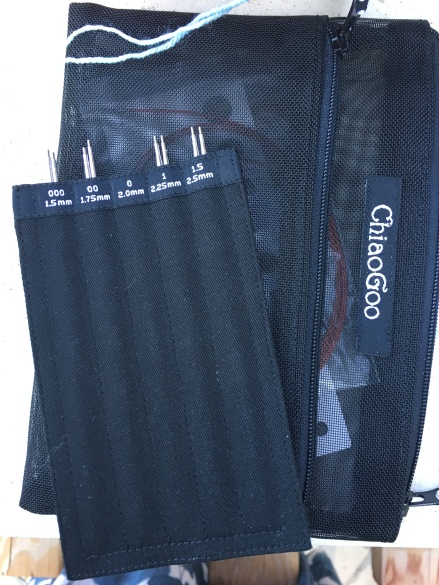 I do really like them.  The cord is nice and flexible, the points are pointy, and so far I have not broken them, or even bent them.  So far. I dislike doing two at a time on one long circular, so I have to make do with sequential sock knitting.

By this time of year I generally have some socks set aside for holiday gifts, but as of today I have two only pair of heavy Oxbow socks, and now 1.5 Idlewild socks. If I intend to do gift socks, I’d better get cracking.

Are you still knitting socks?  Got a drawerful yet?

This entry was posted in Knitting, lace, Socks. Bookmark the permalink.